NCAA Football 11 recreates the intensity of college football Saturdays via TruSchool - a system that reflects the authentic style and traditions of each of the 120 FBS teams in-game.

Recreating one of college football’s greatest traditions, NCAA Football 11 features true-to-life pre-game team entrances from many of college football’s traditional powers: the touching of Howard’s Rock at Clemson, the Ohio State team interlocking arms as they head onto the field, and more. Experience the stunning detail of game day with a full ESPN broadcast graphics package and all-new replay system. From pre-game until the final tick of the clock, immerse yourself in the ESPN Game of the Week.

The NCAA Football franchise continues as a leader in online innovation with the all-new Dynasty Wire feature. Create stories that document the peaks and valleys of building a college powerhouse. Capture video and photo highlights from each game, then share the news of triumph or defeat with the world, by publishing stories to top social networking sites.

"NCAA Football 11 represents the greatest transformation in the history of the award-winning franchise," said EA SPORTS President, Peter Moore. "With the TruSchool system, we’ve replicated the authenticity of college football, from team-specific entrances to offensive styles, like never before. The start of the college football season kicks off today." 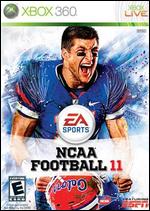