The biggest game of 2010, "Halo: Reach," is getting the ultimate hardware treatment. The Xbox 360 Limited Edition "Halo: Reach" Bundle launches day and date with the game on September 14 and provides both an incredible value and a stunning way to celebrate the iconic franchise. The commemorative bundle will be available with matching custom "Halo: Reach" Limited Edition Wireless Controllers. Additionally, Microsoft and Bungie revealed an onslaught of other "Halo: Reach" news today at Comic-Con International, including a first look at Forge World, Versus Firefight mode and more.

Continuing the "Halo" tradition of offering players a groundbreaking level of customization, Microsoft and Bungie announced Forge 2.0, a robust set of new editing tools built into "Halo: Reach" that will empower aspiring game designers to easily create and share their unique "Halo: Reach" multiplayer map creations with the world. Set on one of the series’ iconic "Halo" rings, Forge World is a massive, beautifully-rendered landscape that serves as a giant canvas for players to build unique map creations alone or cooperatively with up to seven friends on Xbox LIVE or system link, or three friends via split-screen. Utilizing the upgraded Forge 2.0 toolset, Forge World holds unlimited creative potential for millions of armchair designers to sculpt, build and share the most intricate and visually stunning maps they can imagine. To showcase the new features in Forge 2.0, Bungie released a new ViDoc that will take viewers on a whirlwind tour of Forge World, which is available for download today on Halo Waypoint, Halo.Xbox.com and www.bungie.net.

Additionally, Microsoft and Bungie are giving attendees at Comic-Con International the first public hands-on with the Firefight multiplayer mode at the Xbox booth, including the newly unveiled Versus Firefight mode, which pits a team of player-controlled Elites with Covenant AI support against a team of player-controlled Spartans. Everyone who plays a Firefight match will receive a free token to unlock an exclusive Noble 6 helmet for their Xbox LIVE Avatars.

The "Halo" excitement at Comic-Con continues throughout the week at the Xbox booth, and on Sunday there will be a special "Halo" panel hosted by 343 Industries at 11:00 a.m. in Room 32AB. "Halo" franchise development director Frank O’Connor hosts this panel of renowned "Halo" creators to discuss the future of the broader "Halo" universe, including appearances by authors and representatives from long-standing partners including Tor Books and Marvel Comics. Additionally, a few lucky fans will receive Comic-Con exclusive commemorative posters celebrating the "Halo" universe by attending the panel event.

Developed by acclaimed studio Bungie exclusively for Xbox 360, "Halo: Reach" launches worldwide on Sept. 14, 2010, and in Japan on Sept. 15. "Halo: Reach" is available for preorder in Standard, Limited and Legendary editions at participating retailers worldwide. The Standard Edition has an estimated retail price of $59.99 (U.S.), and the Limited and Legendary editions of the game will retail for $79.99 and $149.99 (U.S.), respectively, and are packed with extras fans won’t want to miss. As a special bonus, fans can receive a token to unlock an exclusive in-game Spartan Recon Helmet, by picking up a copy of the game on launch day at North American retail stores, and outside of North America by making a pre-order reservation at participating retailers. Fans are encouraged to pre-order quickly as quantities of the Limited and Legendary editions are selling fast and are expected to be completely pre-sold by launch. 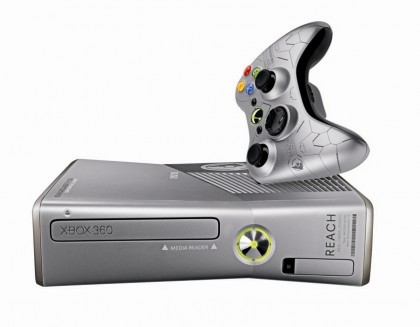