The demanding Project Aces development team at NAMCO BANDAI Games Inc. in Japan weren’t satisfied. They wanted more from the series. They wanted planes that tore apart limb from limb right in front of your face, spewing their oil lifeblood across the sky. They wanted to scrape the streets and dodge the steel skyscrapers of real world cities at blistering speeds, in an enthralling war drama that spanned the globe with a web of intrigue. They wanted players to pick up the controller and become deadly combat pilots in seconds, pulling off breathtaking kills at impossible speeds, and doing battle online in a multiplayer sky littered with fiery supersonic debris. What they wanted was steel carnage in the sky.

The result is not a sequel in the multi-million selling smash hit ACE COMBAT series, but a complete rebirth, a phoenix from the ashes flying at three times the speed of sound. The Project Aces team is building ACE COMBAT ASSAULT HORIZON from the ground up, with new technology fuelling their passionately realised vision of a game that puts players in the dark heart of the fight like no aerial combat game has done before.

"For us, this is a rebirth of the Ace Combat series, and a chance for us to take the series in a completely new direction," said Kazutoki Kono, Producer at Project Aces, NAMCO BANDAI Games Inc. "We’re confident that we’re going to create a new kind of action shooting (high-speed and destruction) experience with ACE COMBAT ASSAULT HORIZON, and we’re pouring passion, vision and skill into making a game like no other. We want to bring players closer than ever to the action so they feel the energy surge through them with every shot fired." 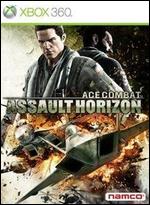