If we’ve learned anything over the last few years, it’s that when a new motion control method releases, there are two things it will immediately require: a compellation of sports mini-games and a game that lets you simulate beating the crap out of someone. The Wii had Wii Sports boxing, PS3 Move is getting The Fight, and now Ubisoft is coming through for Kinect with Fighters Uncaged, a new title that promises to teach you real Muay Thai kickboxing techniques.
Exclusive to Kinect, Fighters Uncaged has players "creating" (to use the press release’s word) 70 different strikes that are all inspired by real martial arts. This includes punching, elbowing, kicking, and blocking, as well as voice-activated "super-strikes." There will be 21 different settings for fights to take place across (rooftops, alleys, docks, etc.), and a jump-in (literally?) multiplayer feature. It sounds like this mode won’t devolve to you and a buddy actually fist-fighting each other, though, as you’ll only be teaming up to "take your enemies down with your friends."

"Fighters Uncaged is the first motion fighting game for Kinect, dedicated to a core audience," said Caroline Stevens, EMEA director of marketing at Ubisoft. "Fighters Uncaged requires players to get out of their seat to engage in a controller-free full-body combat game and experience the authentic fighting style of Thai boxing."

Fighters Uncaged is being developed by AMA Studios, and is set for release alongside the launch of Kinect this November. 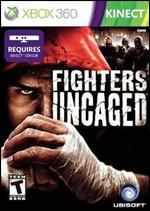