Everyone’s looking forward to the next stage in the battle between Guitar Hero and Rock Band, but coming in between the two huge music game releases will be DJ Hero 2, as Activision revealed to Joystiq during GamesCom that it’ll hit shelves on October 19.
This will make for a plastic-musical-instrument-packed holiday season, as Guitar Hero: Warriors of Rock is coming on September 28, and Rock Band 3 is coming on October 26. Will holiday shoppers have enough room in their hearts for three different peripheral-based music games?! The industry will soon find out.

DJ Hero 2 adds a number of new features to the formula, including jump-in-jump-out multiplayer, vocals, and "fill" sections in songs similar to the free-form drum fills in Guitar Hero and Rock Band. You can find out more about the game in our recent preview, and see its full list of musical artists here. 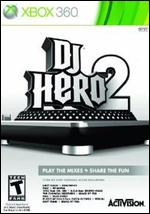