"Our goal with Shank was to create a game that pays homage to the classic 2D brawler, while seeing how far we could push it by melding it with our own pulp-fiction influences," said Jamie Cheng, CEO of Klei Entertainment. "At the end of a long road that began as an indie dream in 2009, we’ve finally shipped a visually striking, cinematic brawler."

Shank tells a classic story of gangland betrayal through a violent, pulp-fiction lens. Gamers play as Shank, getting their hands bloody as they uncover the secrets of Shank’s past and the reasons he is hell-bent on revenge. With a deep and intuitive combat system, players unleash a tremendous number of creative combinations as they take down waves of enemies standing in their path. Shank also features a special co-operative campaign, designed to be played with a friend locally, which tells the backstory of the revenge plot. This prequel mission allows players to play as Shank or his partner-in-crime Falcone, with deadly double-team moves and gameplay that encourages teamwork. 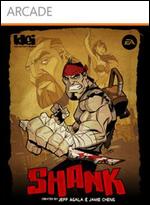