Our first Title Update is being tested right now and then it will be handed off for certification and in your hands as soon as possible. Here’s a full list of fixes and changes that will be in the Title Update.

* Reworked the way we handle parties in the pregame lobby to avoid splitting them up.
* Fixed several issues where host migration would fail immediately.
* Decreased wait time after a successful host migration.
* Lobbies will now host migrate and not kick you back to the main menu.
* If the host leaves during the end of match sequence, the host will migrate and players will return back to the lobby and not the main menu.
* Optimized the time it takes to migrate hosts, shortening the time to migrate.
* Improved weapon hit detection in high lag situations.
* Fixed endorsements being incorrect after a host migration.
* Fixed getting into private matches without an invite.

* Fixed players being able to damage the Moneyball’s shields.
* Fixed visual effects staying on the player after the effect has worn off.
* Reduced the amount of increased damage the Moneyball takes in Overtime, thus reducing the effectiveness of "Juice rushing".
* Fixed Ringouts, Headshots and Grapple Kills not giving the proper amount of money. Balanced Ringout money to reflect the change. Message now displays correct total amount of money earned.
* New "You Win!"/"You Lose!" UI for the end of a match.
* Fixed juice benefits ending early if the player grapples during juice.
* Fixed juice bar getting stuck full.
* Fixed deploying on or near active jump pads.
* Fixed controller sensitivity of 10 not saving.
* Fixed messaging for kill streaks. Ultra and Uber streaks will now be named properly when popping up above your cursor.
* Fixed an instance of the player’s skill pick UI going away unexpectedly.
* Fixed an issue with bots walking by enemy turrets and bots without engaging them.
* Fixed upgrading a turret that has been hacked to the opposing team.
* Fixed turret collision not going away after being destroyed.
* Normalized time between a grapple miss and the ability to grapple again for all grapples. The biggest change is the Assassin not having as big of a penalty for a missed grapple.
* Fixed the "Team Leader" and "Team Player" highlights from being reversed.
* Fixed players being able to mute themselves.
* Fixed idle kicking when standing still but still looking around and/or shooting.
* Fixed players who cheat and hack their profiles from being able to apply multiple gold endorsements.
* Optimized main menu ticker for players with large friends lists.
* Fixed HUD showing Moneyball shields as up during over time even though they are down.
* Reduced announcer talking for kill streaks to help reduce the repetition of announcements.
* Various performance optimizations.

* Reworked Support’s bot aura so that it doesn’t make the Jackbot appear overhealed.
* Fixed Support’s Firebase skill from recharging while the Support is dead but the Firebase skill exists.
* Fixed being able to use the Heal/Hurt gun while taunting.
* Fixed some instances of the Support’s Firebase not appearing when thrown.
* Fixed Heal/Hurt gun not being affected by rate of fire endorsements and reduced it’s overall healing/hurting ability to compensate for the change.
* Fixed Supports being able to use their Hack skill through walls.
* Fixed Supports being able to throw their Firebases through the wall.
* Fixed Air Strikes sometimes damaging enemies under cover.
* Supports can now only Hack enemy turrets at Hack level 3.
* Increased the time to Hack enemy turrets.
* Decreased duration of Hack on a turret for levels 1 and 2.

* Tank’s Jet Gun alternate fire damage is now reduced depending on the percentage of ammo left in the clip. Increased the full clip damage to compensate.

For those of you going to PAX this week, you’ll be able to play the updated version of Monday Night Combat that incorporates the Title Update changes. Stop by the Uber booth for tournaments, merch like character statues, shirts, and prints and say hi to the Uber team.

As always, we want your feedback and we will continue to be active on our forums and Twitter. 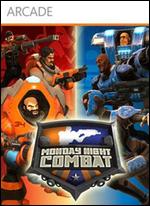