Gearbox boss Randy Pitchford has just confirmed that development on Duke Nukem Forever is complete. The title’s being "polished" and will be released in 2011.

Speaking at PAX tonight, Pitchford also confirmed that the title would be released on Xbox 360, PS3 and PC.

"When Duke ran into trouble, we were glad to [help him out of] a spot," said Pitchford. "You can’t let the Duke die, right?"

He added: "We wanted to deliver the game this is supposed to be.

Pitchford admitted that the title has some "questionable content" and that Gearbox hasn’t yet been through all the proper processes with the ESRB age ratings "police".

For that reason, a video shown at PAX wasn’t streamed by 2K. Pitchford asked the audience to "keep the video on the down-low."

"I could jerk off and talk to you guys all day about it - but haven’t you been teased enough?" 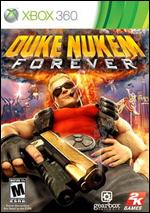