It looks as if D3 Publisher has a sequel to Earth Defense Force 2017 in the works, if a new website launch is any indication. Located at edfia.com is a logo for a new, unannounced EDF game -- Earth Defense Force: Insect Armageddon.
There’s nothing else to be found on the site, but according to Siliconera, the domain was registered by D3 last month, so it doesn’t look like a hoax. Most recently, EDF 2017 developer Sandlot was working on the Nintendo-published action game Zangeki no Reginleiv for Wii, which was released this past February. The last EDF game was released for Xbox 360 in March 2007. It wasn’t a technical marvel but Scott Sharkey did give the game a B+ in 1UP’s review, noting it was "like the best parts of every third-person shooter ever, boiled down to the most mindlessly fun essentials."

Besides a Rating Pending from the ESRB and the logo you see above, there’s absolutely no information on the new site; not what platforms we can expect to see it released on or when more information will be released. We’ll be keeping an eye on the site for any details that might come up. 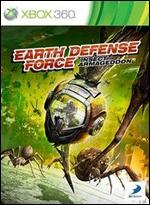