Just as the U.S. Open rolls into its second week, 2K Games has announced Top Spin 4, the latest entry in the long-running tennis sim series that started as an exclusive for the original Xbox. But as with Top Spin 3, Top Spin 4 is going multiplatform for the Xbox 360, PlayStation 3, and Wii, this time with 2K Czech (the studio behind Mafia II) handling the project.
The announcement is a little light on specific details, instead offering vague promises of "redesigned controls" and "one of the deepest player rosters to date." Specific players aren’t mentioned (besides more vague promises of "top athletes and legendary pros"), but one player that is confirmed for the game will only be available as a pre-order bonus. If you reserve Top Spin 4 at GameStop, you’ll get a "vintage" version of tennis legend Andre Agassi. And as you can see in the provided screenshot, "vintage" does indeed mean full-on mullet.

"Top Spin 4 is shaping up to be the most realistic and exhilarating tennis game in the Top Spin franchise," said 2K Sports president of product development Greg Thomas. "For this iteration, the development team is focused on delivering a bold new take on the sport of tennis by allowing gamers to experience first-hand an uncanny level of realism in the player and stadium models, authentic audio captured directly from real tennis matches, and all-new innovative controls to dominate the competition."

Fans of the series will know that Top Spin 3 also had "innovative controls" (having players hold down a button and then release it in time to strike the ball), but those weren’t universally well received. Let’s hope whatever 2K has in store for Top Spin 4 works as well in practice as it does in theory.

Top Spin 4 is due out next year. 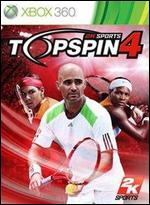