This comes as no surprise after Takahashi said last month that thinks his time as a game creator may be coming to an end.

Speaking in the frank interview with OPM, Takahashi called this year’s E3 showing "dull" and revealed he wants to test his creative skills on something other than gaming.

These sentiment weren’t new either; he told CVG way back in 2007, "I do feel many games do lack the wow factor," and that "it feels like the videogame industry in general has lost its direction." Clearly a troubled man.

Takahashi is credited for some of the most bizarre games over the past decade, most notably Katamari Damacy on PS2 - a niche Japanese game in which you control a miniature alien who rolls a sticky ball over objects, picking them up until his ball is eventually large enough to roll up entire continents and, eventually, the Sun.

Despite its niche flavour, Katamari’s success went on to spawn sequels on the PS2, Xbox 360, PSP and PS3, as Takahashi went on to create the equally (if not more) bizarre game Noby-Noby Boy on PSN.

Takahashi hasn’t revealed what his next move may be, but it doesn’t sound like he’ll be making any more games. 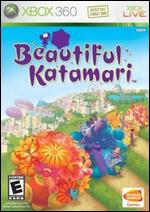