Dead Rising: Case Zero was nothing if not an experiment in cheap, pre-release DLC. The prologue gave a taste of Dead Rising 2 without repeating content from the full game, and it was priced to move. GamerBytes reports that it paid off in a big way, to the tune of over 300,000 sold in the first week. The report speculates that Capcom could have made over a million in revenue from the downloadable title in its first seven days.
Though Case Zero gives a sampling of Dead Rising 2, it smartly differentiated itself by consisting of entirely separate content, including story beats not found in the main game. Capcom also priced it at a mere $5, which is unheard of for most Xbox Live Arcade games, especially after Microsoft’s yearly Summer of Arcade promotion laid down $15 as the new standard. A $5 price point made the investment small enough for consumers to bite on, and a generally positive reception means most gamers probably weren’t disappointed.

EA is attempting a similar tactic with Dead Space Ignition, the downloadable prequel to Dead Space 2. But we don’t know the price of Ignition, and the gameplay is significantly different from the game proper. With the success of Case Zero, Capcom may have unintentionally set the pre-game DLC price and quality standard in the minds of gamers. 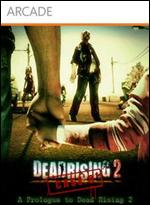