Today DreamCatcher Games and JoWooD Entertainment officially confirm the release date of the demo version of ArcaniA - Gothic 4 for September 24th, 2010 for Xbox 360 and PC. After thousands of gamers had the chance to play it at GamesCom 2010 in Cologne, Germany for the first time, the demo version will now be released for all fans and the rest of the gaming community.

The demo comprises the first two hours of the game and shows the beginning tutorial level on Feshyr Island featuring selected quests. Fight off demons, hone your skills and prepare for a bloody battle fueled by vengeance. Get your first taste of ArcaniA: Gothic 4. 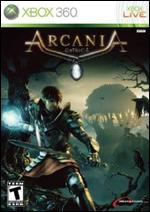