There’s still some time to wait before David Jaffe’s next Twisted Metal game is completed, so in the meantime Activision is looking to capitalize on the vehicular combat market with Blood Drive. Coming this November with a discounted price tag of $49.99, Blood Drive is a new car combat for Xbox 360 and PlayStation 3.
Its existence was actually first made public earlier this year when a listing for an Activision-published game called Death Drive showed up on GameFly, though if didn’t offer up any information about the game. Then, earlier this month, "Blood Drive" was rated by the BBFC (via CVG) and a listing with some actual details about the game appeared on Amazon.

Activision officially announced the M-rated title today. The premise is that you’re a driver on a TV game show where drivers try to kill each other while also competing against zombies, of which there are many varieties, including zombie frat boys, cops, strippers, and bachelorette partiers. It also promises to have multiplayer support for up to four players who can drop in and out at any time. 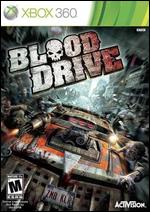