The hit XBLA game Toy Soldiers is primed for a new injection of downloadable content, which strays from World War I but keeps its playful motif. Signal Studios has announced that the "Invasion!" DLC will release next Wednesday, September 29, for 400 Microsoft Points ($5).
Players will control the German armies against the British, who "discovered hitherto unheralded weapons." The new enemy units will include knights, fire trucks, space tanks, spaceman infantry, flying saucers, and the boss unit "RoboBob." Players can also control the U.S. P51 Mustang WWII fighter plane or the T-17 Space Tank. The DLC will include three new single-player levels, two new multiplayer maps, and a new Survival level. It also packs in 50 gamerscore in new achievements, for the junkies out there.

Toy Soldiers enjoyed a positive reception and high sales thanks to its clever blend of action, RTS, and tower defense elements. A relatively inexpensive DLC pack should inject it with some new life as we move into a heavier release season. 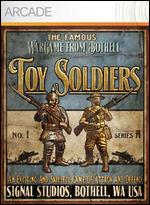