Sonic the Hedgehog 4 Dated for October for XBLA

Sonic the Hedgehog 4: Episode 1, Sega’s brand-new continuation of the classic side-scrolling Sonic series, finally has a release date (via IGN). In fact, it has a lot of release dates, across a lot of platforms. Deep breath.
First, Sonic 4 will be released on the iTunes App Store on October 7. Next, it’ll be available on the Wii Shop Channel on October 11 (October 15 for Europe). Then it’ll be available on the PlayStation Store on October 12 (13 in Europe), and finally it’ll be out worldwide on Xbox Live Arcade on October 13. As for price, it’ll be $15 across the board, which works out to 1500 Wii Points, 1200 Microsoft Points, and $14.99 on the PlayStation Store.

Sonic the Hedgehog 4: Episode 1 was originally supposed to be released earlier this year, but was delayed for a little more fine-tuning. As for how many more "episodes" we can expect and when we can expect them, Sega hasn’t given any details yet. 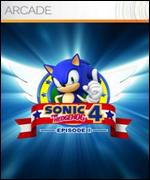