If you’re still sad about how Beyond Good & Evil still isn’t backwards-compatible on Xbox 360, or that its sequel was put on hold last year, then this news might be welcome. During Ubisoft Digital Day, a press event highlighting the company’s digital distribution catalog for the next year, a fancy new remastered version of the cult classic was announced.

I briefly played it, and the game does indeed look like a clean and jaggie-free version of the original. There was a minor framerate hiccup during a crowd-intensive city scene (which I attribute to development and optimization), but otherwise, it truly is a nice way to finally play the game on a modern HD console.

Not mentioned in the press release, but prominently displayed on the menu, was a leaderboard option, in case you feel competitive when it comes to playing single-player action-adventure games.

The official press release also has a slight bit of curious wording, stating, "In addition to giving fans the opportunity to play the critically acclaimed game, Beyond Good & Evil HD will allow players to unlock achievements and trophies by discovering new secrets in this masterpiece adventure game." At the moment, Ubisoft personnel note that this simply means Trophy/Achievement support is in, but this does give enough wiggle room for some "new since 2003!" Easter Eggs or secrets to be implemented, perhaps.

No pricepoint was given, but regardless, we’re hoping that this fancy new version, assuming it turns out well, ends up finding a wider audience compared to its original incarnation. 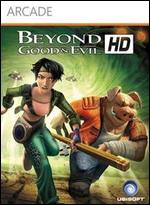