Ubisoft has announced that it is to publish Zeit2 -- originally developed by students at the Technische Universität in Berlin -- on Xbox Live Arcade and PC, scheduled for "Holiday 2010."

A side-scrolling 2D shoot-em-up, Zeit2’s "twist" is that it allows the players to move forwards and backwards in time, making it possible for the player to combine shots and power and be assisted by time traveling version of themselves. The game was a finalist in the 2009 Independent Games Festival’s Student Showcase. 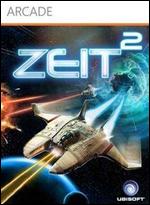