It would seem that DmC: Devil May Cry is really going the distance with the reboot concept -- to the point that Ninja Theory’s upcoming stab at the series will employ a completely different game engine than DMC4. The developer confirmed on its forums that Dante’s next adventure will be powered by Epic’s Unreal Engine (just like it’s Enslaved for Namco Bandai) and not Capcom’s go-to multiplatform development suite, MT Framework; which has powered many of Capcom’s premier titles this console generation, including the last DMC game.

To date, only internal Capcom studios have created games with MT Framework, but the company has said it’s willing to share with external studios. Earlier this year, Capcom published its first Unreal Engine 3 game in Airtight Games’ Dark Void. Ninja Theory’s Enslaved, which will be released next week (published by Namco Bandai), is also an Unreal-powered game. 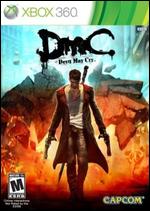