Tony Hawk: Shred is hitting stores in just a few weeks, as Activision has officially dated the game for October 26 in North America and 29 in Europe.
On top of announcing the release date, Activision also launched a new website for the game "that gives players a head start on honing their over-the-top skate and snowboarding skills." As such, the site has a section showing demos of over 50 tricks to perform in the game by manipulating the board controller that launched with Tony Hawk: Ride last year. The site also shows off a new "Birdhouse" board, which will be available exclusively as a limited pre-order bonus at Toys R Us.

As Activision explained earlier this year, Shred will be more focused toward younger gamers, with cel-shaded graphics and more "over-the-top" arcade-style gameplay. Whether the change in focus is also due to Ride’s poor reviews last year, though, is a subject that will probably be left for the realm of debate and speculation. 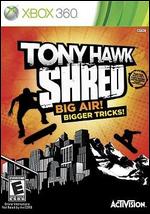