Double Fine’s upcoming RPG Costume Quest now has a release date.
As expected, the Halloween-themed title will be released around the actual holiday. It’ll be arriving about a week beforehand.

Gameplay revolves around going door-to-door collecting items and picking up quests at costume parties. The battle system is a traditional turn-based setup, with characters becoming a superpowered version of their costume.

Costume Quest will be out October 20 on Xbox Live Arcade and It will cost $15.00. 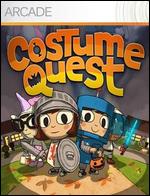