Bush Takes Obama to the Courts in NBA Jam

Like its arcade predecessors, the new NBA Jam sports plenty of goofy secret characters. EA’s two-on-two basketball game not only includes a return cameo by the Beastie Boys, but ESPN reports that players can also take to the court as President Barack Obama and a number of other prominent political figures.
Other hidden ballers include 42nd President of the United States Bill Clinton, Vice President Joe Biden, Secretary of State Hillary Clinton, and former Vice President Al Gore. Republicans aren’t being shut out of the fun, either; resigned Alaska Governor Sarah Palin, Vice President Dick Cheney, Senator John McCain, and President George W. Bush are also all playable.

EA wouldn’t reveal how to unlock these characters just yet, but expect word to trickle out soon enough. NBA Jam hits the Wii today, with an Xbox 360 and PlayStation 3 release expected "in time for the holidays." 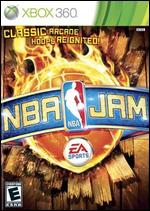