Maybe it had something to do with the United States’ sudden interest in this year’s World Cup, or because of some different reason altogether, but EA Sports is claiming that FIFA 11 has set a record for the biggest launch ever for a sports game. In less than a week, the game sold more than 2.6 million copies worldwide and is estimated to have generated more than $150 million at retail through October 2, according to a press release.
FIFA 11 was released on September 28 in North America and October 1 in Europe, so selling 2.6 million copies in just a few days does seem to be an impressive feat. EA also revealed that on October 1 and 2, more than 11.3 million games of FIFA 11 were played online.

In conjunction with the announcement about the game’s sales success, EA Sports has announced that FIFA 11 Ultimate Team will be made available for free on both the Xbox 360 and PlayStation 3 in November.

"We’re thrilled at how fans embraced FIFA 11 last weekend, and we are excited to be able to offer one of our most popular game modes -- FIFA 11 Ultimate Team -- for free this November," said EA Sports president Peter Moore. "This is a landmark achievement for EA SPORTS -- we’ve shattered sales records at retail, critics are praising FIFA 11 as being one of the most authentic and innovative titles ever, and fans are connecting and competing with other gamers around the world and have logged a record number of online connected game sessions."

Our review of FIFA 11 wasn’t quite as positive as Moore’s statement would suggest, though the game did earn a very solid B. 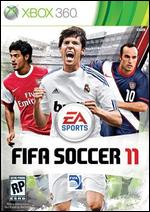