It’s called X-Men: destiny and apparently casts players as new mutant recruited in a "rich, branching storyline that features a deep element of choice and gives players ultimate control of their destiny."

We like the angle, unfortunately that’s all we’ve been given so far.

We’re expecting more info to slip out soon and will be keeping our eyes on the game’s official website at www.XMenDestiny.com as well.

Of course Activision’s last dip into the mutant gene pool was with X-Men Origins: Wolverine, which was incredibly brutal if a little glitchy. 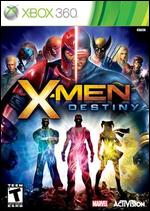