Rez 2 prototype was in the works

According to industry vet Jake Kazdal, immediately following the completion of Rez, a small group of developers at United Game Artists worked on a prototype for Rez 2. Kazdal -- a man who’s worked everywhere from Nintendo to Irem to Sega, and is currently developing Skulls of the Shogun -- also explained on the latest 8-4 Play podcast that another game he worked on, Steven Spielberg’s now mythic "Project LMNO," has been cancelled. EA confirmed as much, telling Joystiq this afternoon, "While EA maintains its relationship with Steven Spielberg, we ceased development of LMNO."

We pushed EA for clarification about the status of any projects in development with Spielberg and were told again, "EA maintains its relationship with Steven Spielberg. EA has ceased development of LMNO. EA continually monitors development resources and adjusts resources as appropriate. No new title announcements."

Kazdal expanded on the project as it once was, saying, "I don’t wanna get the EA police on me. I can’t say too much. It was very ambitious. We had a small team -- very smart people on it. And we spent a lot of time thinking and talking. And doing some stuff. And it just sort of ... I don’t know exactly what was the thing that made it fall apart." He further explained the cancellation of the project -- a project he claims to have worked on for two and a half years -- by saying, "I’m sure anybody you ask is gonna tell you something a little bit different, but it didn’t end up ever taking off. There was some rival game stuff that may or may not have come out of EA that was basically the same thing minus some of the stuff we were doing. There was just a lot of politics."

The situation with Rez 2, however, was far more cut and dry. "The American marketing team of Sega was a real bunch of heroes at that time, and the Rez marketing job was a train wreck. The game sold about 15 copies. And they were like ’Rez 2? HA HA! Right.’ And so that went away for a long time." Kazdal added that Rez 2’s prototype video exists "somewhere," but he’s "never seen it anywhere outside of Sega." Further, the prototype’s described as "more abstract" and "more trippy" than Rez. 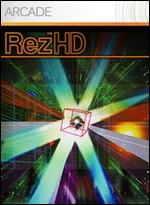