Activision Blizzard outlined the next two weeks of DLC for Guitar Hero: Warriors of Rock this morning. The remaining music downloads for the month of October will include, among other things, choice hits from the Rocky Horror Picture Show soundtrack and a pack of free songs for Xbox Live Gold subscribers.
First up is the Rocktober Track Pack, set to debut exclusively on the Xbox Live Marketplace beginning October 19. The three-pack of songs features contributions from My Chemical Romance, Disturbed, and Muse. Xbox Live Gold users will be able to download the bundle absolutely free of charge for one week, at which point it will become available to all Xbox 360 users for $5.49 (440 Microsoft points).

The following week is scheduled to split up Soundgarden’s Telephantasm album into downloadable singles. Fans should be able to purchase individual tracks from that album starting Tuesday, October 26. Also arriving that week will be the Rocky Horror Picture Show Track Pack, which will run the usual $5.49 (440 Microsoft points; 550 Wii Points). Individually purchased songs from each of this month’s track packs are priced at $1.99 (160 Microsoft points; 200 Wii Points) apiece.

Catch up on the full slate of upcoming Guitar Hero tracks below:

•"Blow Up the Outside World" by Soundgarden 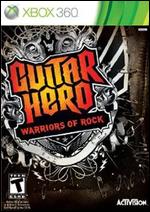