Square Enix will soon be releasing downloadable content for their recently release mech shooter Front Mission Evolved, including new Wanzers and weapons.
There are two weapon packs and two Wanzer packs. The first one includes a Darkhog Machine Gun, Blackstone Shotgun and Sieger Rifle, and is being offered for free. The other weapon pack contains goodies including a bazooka, rocket launcher and missile launcher, and is going for $2.99.

As for the Wanzers, $3.99 will net you a Stork and a Tatou or a Wild Colde and an ISV-Prototype. The choice of giant robot is yours.

The DLC should be available soon. 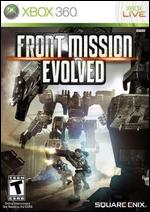