If 5th Cell, makers of such colorful and innovative Nintendo DS games as Drawn to Life and Scribblenauts, were to say they were making their first console title, what kind of game would you expect? Would you have answered, "third-person shooter set in ravaged future wasteland with warring factions"? Well, how prescient of you.
Yes, 5th Cell has announced their next game will in fact be Hybrid for Xbox Live Arcade, and it’s quite a departure from the kind of games the developer has made so far. Hybrid’s teaser website suggests a post-apocalyptic world where "Variants" battle against "Paladins," neither of which seem to actually be human ("logs" from both factions refer to humans as though they were a separate species). The teaser site also has a short trailer, which shows what looks like a standard cover mechanic...and what also looks like an enemy character flipping through the air across a long distance to attack the character taking cover.

But while the setting and gameplay are taking 5th Cell to new territory, it seems they’re still trying to stick to the reputation for innovative game mechanics they’ve established with Drawn to Life and Scribblenauts, as they promise Hybrid will have "a completely new gameplay experience never seen before in the [third-person shooter] genre." Could that perhaps have anything to do with the mega-flipping enemy character in the teaser trailer?

Hybrid is set for release some time in 2011. 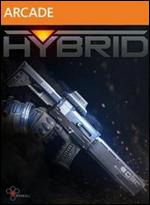