Richter is an oft-returning character who carries the signature Castlevania whip and uses subweapons like Julius and Jonathan do. Maria is a little girl (as opposed to her adult incarnation in Symphony of the Night) who summons animals when she attacks. She can also hide under a turtle shell for extra defense.

What makes this DLC release unusual is two-fold. First, the characters appeared on a Tuesday instead of the usual Wednesday. Second, their "release date" on the Xbox Live Marketplace is listed as October. Perhaps a side-effect from the reported glitch that delayed last week’s DLC?

With this week’s additions in place, all of the leaked material from this summer has been made official. There are still a few unused songs on the game’s soundtrack though, not to mention plenty of other Castlevania games to pull protagonists from, so more DLC would not be surprising. 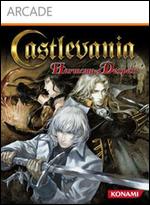