Venetica didn’t really win critics over back when it was released in Germany -- while the story is supposed to be pretty good, the gameplay was called bland and repetitive. Nevertheless, Atari is bringing the game to North America, and will release it on the Xbox 360, PlayStation 3 and PC on January 11 of next year.

Venetica takes place in 16th century Venice, and casts the player in the role of a girl named Scarlett, who just so happens to be Death’s daughter. She has to save the world and her father from a powerful necromancer. Sounds like fun -- just be careful around Death, otherwise he might end up making you do his job for him. 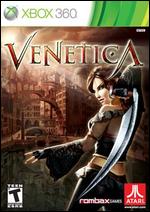