Raven Software, the studio behind Singularity and Wolfenstein, is working on another military FPS, and it may be a sequel to one of those franchises. A Gamasutra job posting calls for a Lead FX Artist to help with "an established, console-based, realistic, first-person military shooter." Later in the job description, it mentions that "other effects (sci-fi, fantasy, etc.)" would be a plus for submitted portfolios.
It’s the "established" part of the job description that leaves room for sequel speculation. Both Singularity and Wolfenstein fit the description of console-focused military shooters, and both include sci-fi elements. It could be either of these, if not another franchise that Raven hasn’t yet worked on.

Despite recent layoffs, rumors have circulated that Raven was working on a stealth action Bond game. It’s unlikely that this latest job posting is for that project, though, since the Bond game was rumored to be third-person. 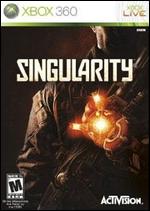