Microsoft hasn’t always been entirely open to releasing free Xbox 360 DLC, but it looks like they think it makes sense when it comes to their more mainstream-oriented Kinect titles. Both Kinect Sports and Kinect Joy Ride are getting free additional downloadable content, with Kinect Sport’s DLC available today, and a car pack coming to Joy Ride on January 4.
The Kinect Sports DLC, titled "Party Pack," adds new activities for each sport in the game, including Pinvaders (Bowling), King of the Ring (Boxing), Target Smash (Table Tennis), Rapid Runner (Track and Field), Super Striker (Soccer), and Fruit Splatter (Volleyball). These activities also add an extra 250 Gamerpoints to Kinect Sports, spread across 10 new Achievements.

As for Joy Ride, a Chevrolet-branded car pack is coming next month, which adds a Corvette, Camaro, and Cruze to the game. And just in case Chevrolet isn’t plastered all over it quite enough, you’ll actually even need to click on a Chevrolet ad in the Xbox Live Marketplace in order to download it once it’s released. Again, this one’s coming on January 4. 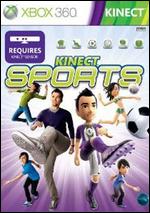