When it comes to collector’s edition bonus items, there’s little better than early access to the beta for a game that, honestly, most people are probably looking forward to even more. Such is what Epic Games is offering for Bulletstorm, as the developer announced today that the "Epic Edition" for the game will come packed with a code for early access to the Gears of War 3 multiplayer beta.
The Bulletstorm Epic Edition will cost $59.99, and while the game is being released for the PC, PlayStation 3, and Xbox 360, the Epic Edition will only be available for the 360 -- which, obviously, is the only console that can offer access to the Gears 3 beta. Still, that also means PC and PS3 gamers won’t have the option of getting the other few bonus online features the Epic Edition contains, including "25,000 experience points, visual upgrades for their iconic leash, deadly Peace Maker Carbine, boots and armor."

The Bulletstorm Epic Edition will release alongside the standard edition of the game on February 22. As for how much earlier it’ll get you into the Gears 3 beta, there’s no telling yet since Microsoft still hasn’t announced when the beta will begin -- as of now, it’s only slated to start some time in early 2011. 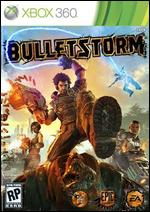