Following a slew of new downloadable releases announced by Microsoft last night, Capcom has now revealed at CES that Bionic Commando: Rearmed 2 -- which is (follow us here) a sequel to the remake of the original Bionic Commando -- is set for release on the PlayStation Store and Xbox Live Arcade on February 1 and 2 respectively.
The game will come in at $14.99, or 1200 Microsoft points. Capcom also released a ton of new screenshots for the game, which you can see on their official Unity blog. 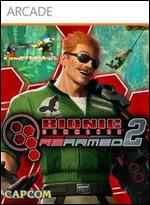