Producer Yoshinori Kitase and director Motomu Toriyama have said in Dengeki Magazine this week that Final Fantasy XIII-2 will feature a much darker story than that seen in FFXIII.

The pair insisted the sequel will feel less poppy than its parent.

The story continue from the end of Final Fantasy XIII, with some characters returning for FFXIII-2 "with major and unexpected changes," according to Siliconera.

FFXIII-2’s story will see players trying to find the game for the invisible world of Bunibelle, with the Goddess Etro playing a central role to the plot.

Kitase and Toriyama also said they had taken on board criticism related to FFXIII, with opinions regarding some of the characters, the story and interface from the RPG noted.

Easy mode, which was introduced in the International Edition of FFXIII in Japan for 360, is also being considered for FFXIII-2.

FFXIII-2 was announced last week at an event in Japan.

It releases this year in Japan and "next winter" in the west for PS3 and 360. 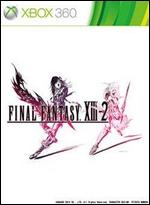