2011 is shaping up to be the year of Bethesda

You thought that Bethesda would leave you alone until it assaulted your wallet with Rage in September, and then The Elder Scrolls V: Skyrim in November. No such luck, we’re afraid. The company just announced it’ll release parkour-based shooter Brink on May 17, followed by fantasy action game Hunted: The Demon’s Forge on June 1. Have they no compassion?

In related news: We never noticed until this exact moment, but wouldn’t Brink and Hunted be great names for a duo of hardened private dicks with noses for trouble? You know, just two long-gone daddies with fists of steel and hearts of gold mixing it up with the local toughs? Maybe May and June are their kind-hearted, cocktail waitress girlfriends? ... We’re ... we’re all going along on this one, aren’t we? 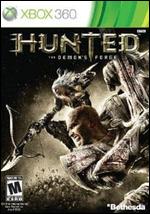