2K Sports announced one of its marquee sports titles, NBA 2K11, has sold close to 4 million units around the world since launching in October. That figure is an improvement on NBA 2K10, which sold a little over 2 million units worldwide in a similar time frame last year.

The competition for basketball gamers was undoubtedly less fierce this year because of EA’s decision to delay and then cancel NBA Elite 11, an attempt to revive their flagging NBA Live brand. The only other major basketball game available in the fall was EA’s arcade revival NBA Jam. 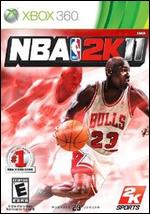