Armored Core 5 was first announced a year ago in Japan, promising "violent mech action" and a decently-sized reinvention of the long-running robot combat series. Since then, though, there’s been zero new information on the PS3/Xbox 360 sequel whatsoever.
As From Software producer Toshifumi Nabeshima explained to Famitsu magazine in this week’s issue, the yearlong silence was necessary in order to make AC5 the great leap foreward he envisioned. "We had a solid concept in mind for AC5 when we announced it a year ago," he said, "but when reconsidering it as an action game and as the new AC, too much of it was just basic upgrades from previous games. We didn’t think that was the best thing for a series that’s been going on this long. We’ve received such faithful support from our fans for so long that we wanted to make something we really thought was fun and amazing -- that, and we want a new audience to get involved as well."

So how has AC5 been reinvented? For one, the focus is now squarely placed on multiplayer. "We’ve implemented online modes up to now, but for this game, there’s no ’mode’," Nabeshima said. "Instead, the system lets you smoothly join online play at any time."

Although the game will still offer unspecified support for single-player, the core of AC5 has shifted toward online play, taking place between teams of players over a large and constantly evolving war zone. "The biggest goal is to fight for territory against other teams and secure a land foothold for yourself," Nabeshima commented. "Other teams can try invading your territory, and you can stage raids against other teams. You can also lay out gun turrets and other defensive units in your territory to defend your land when nobody in your team is logged in. You’ll need to think over the positioning of your defenses carefully, though, or else you’ll find yourself a pretty easy retaliation target. So the stronger teams are going to need both people who’re good at action games and members with a decent grasp of the game’s strategic elements."

Although a team can be any size, online sorties take place with groups of five members at a time -- four robot pilots, and one "operator" who gets a special map screen (shown above) and can give out voice-chat orders to the others. As for the stupidly powerful "Over Weapons" touted in the first announcement? "They’re still there, of course," said Nabeshima, "but now they’re more of ’just another feature’ instead of the main thing we were pushing a year ago. Their implementation has remained the same over the past year, so they have a bit less of a presence now that the overall volume of the game has ballooned. They’ll be hard to use without help from your team members -- one player will have to charge it up while another corrals enemies together for the shot and tells him to hurry up and fire already via voice chat."

AC5 has been pushed back from its initial 2010 release window to sometime in 2011. As with Dark Souls, Namco Bandai Games will be handling publisher duties in the US and Europe. "AC5 is back for the first time in a year -- and, really, I think this is the new starting point for us," concluded Nabeshima. "I won’t ask gamers to forget about the old AC5, because that old AC5 is still all in here. It’s definitely a powered-up AC5, though." 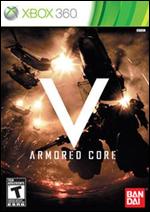