Inversion finally gets a date

Saber Interactive’s sci-fi shooter, Inversion, was announced back in 2009 and was scheduled to arrive in late 2010 -- and it’s still in development. Publisher Namco Bandai has announced today that the game is currently pegged for a February 7, 2012 launch on Xbox 360 and PS3.

Inversion allows you to create isolated zero-gravity fields, forcing objects caught inside to defy nature’s laws and provide some cover against enemy fire. 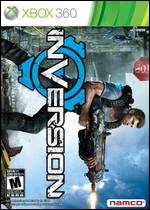