Madden will be the only NFL-licensed game series on the market for at least two more years, thanks to a new agreement between Electronic Arts and the NFL. This is the same exclusivity contract that killed the NFL 2K franchise and ensured Madden would face no real competition. It was originally set to expire next year, but will now run through 2013.
As anyone who has watched ESPN lately is aware, there’s a very good chance we’re headed towards a lockout in the NFL. The current collective bargaining agreement is set to expire in early March, and certain key issues (such as team owners’ desire to extend the regular season to 18 games) may prevent a new deal from being reached before the 2011 season. That potentially means games, if not the entire season, could be lost. That will in turn have an effect on this year’s Madden game from a variety of standpoints, not the least of which would be EA’s inability to update rosters throughout the season based on the real-life happenings of the NFL.

The Wall Street Journal reported last October that EA was seeking a $30 million reduction from the payments it was set to pay due to the possibility of a lockout. Sports Business Journal Daily is now reporting that EA has been given an unspecified break from its obligations for next season, as well as a one-year extension to the contract, which had been set to expire in 2012.

"For one of our core partners in a difficult environment, we say let’s look at this, and maybe it makes some sense to extend something out longer and give our partner some relief in the short term but gain something on the back end," said Jacksonville Jaguars owner Wayne Weaver, who is also chairman of the NFL’s business ventures committee.

The report states that the NFL’s deal with EA is the biggest non-TV contract the league currently has. The deal was extended back in 2008 and is said to be worth "well into" the nine-figure range. EA also pays the NFL Players Association between $30 and $40 million per year for the right to use players’ likenesses.

Wedbush Morgan analyst Michael Pachter explained the reasoning for the reduction in obligations for this season. Without the assurance that the 2011 season will take place as scheduled, he said, "Why would EA do TV pre-buys [and] advertise the hell out of the Madden game, which presumably they have to commit to before the launch of the game, which is around Aug. 10? They have to put the game out in the market, and that is why they are getting relief."

Regardless of the CBA status, Madden NFL 12 will still be released this August as planned. 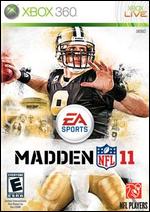