The second in the series carries the name ’Dark Waters’ and is based on a new pirate theme.

Risen 2 aims to provide improvements of the RPG mechanics of its predecessor with an all-new technical foundation, new characters and a fresh story set several years after the first game.

The title also boasts multiple approaches to challenges and a game-world shaped by players’ decisions. The blurb describes it as "the most immersive RPG game world so far".

The original Risen was received rather well back in 2009. Have a look at the first few bits of artwork below to see how this one is looking. 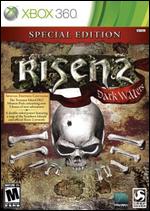