A Rockstar representative has revealed that it will take players between 25-30 hours to complete the main story in Team Bondi’s upcoming LA Noire.

The numbers were revealed during a closed-door demonstration for press at PAX East, which wrapped up yesterday.

Press members lucky enough to get in on the event were shown a homicide case entitled ’The Red Lipstick Murder’.

According to the rep the 25-30 hour figure doesn’t take into account the ’unassigned cases’ which are used to provide history on the game’s secondary characters, or any of the pre-order and post-launch DLC cases.

Rockstar has said that LA Noire’s pre-order content will be released as DLC "at some point after the game comes out". Pre-order cases include ’The Naked City’, ’The Badge Pursuit’ and ’A Slip of the Tongue’. 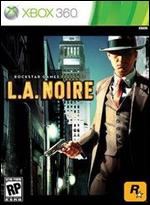