Madden NFL 12 Cover to be Fan-Picked

EA’s announced that the cover for Madden NFL 12 will be picked by fans of the series. All 32 teams will be represented in the pick, but one will front the cover. Up for selection is Super Bowl MVP Aaron Rodgers of the Green Bay Packers, the Chicago Bears’ Julius Peppers and the New Orleans Saints’ Drew Brees, just to name a few.

You can vote here from today until April 27. 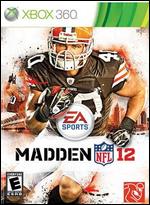