THQ’s announced that a playable demo of Red Faction: Armageddon will be released on Xbox Live Marketplace on May 3.

The shooter casts you in the boots of lead protagonist Darius Mason with the mission of battling to save the human race on the planet Mars from a "greater evil".

There’ll be more physics-based weaponry, powered by Volition’s Geo-Mod 2.0 tech and plenty of earth moving, shooting action both above and below the surface.

In the trial players will be able to battle aliens with the Nano Forge and Red Faction’s signature weapon, the Magnet Gun, the publisher says.

There’s no word on a PC demo yet. 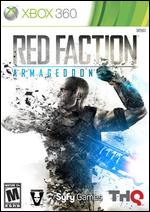