This August will mark three years since Too Human landed on Xbox 360. Leading up to its release, developer Silicon Knights talked it up as being the first part of a trilogy planned for the 360 and yet we’ve seen no word about a sequel in quite some time. That doesn’t mean the developer has abandoned the series -- it still wants to finish the trilogy at some point but it’s not as simple a matter as that.
"We intend to finish the trilogy but no comment beyond that," Silicon Knights head Denis Dyack told IndustryGamers. Dyack might normally be inclined to talk more about it, but he added, "You know, there’s very public litigation around that."

The litigation he’s referring to is Silicon Knights’ lawsuit it filed in 2007 against Epic Games over issues with the Unreal Engine. (SK claimed it "experience[d] considerable losses" as a result of Epic not fulfilling its duties to "provide a working game engine.") Epic promptly tried to have it dismissed but that motion was denied. After a long wait a decision was made earlier this year to allow the case to be heard in front a jury which SK framed as a "victory in their litigation against Epic." Epic on the other hand claimed it only meant a chance to "consider both sides’ evidence." The Gears of War developer said it will be "fully vindicated." It remains to be seen what will come of the case.

Too Human wasn’t met with the greatest of receptions after its long development cycle, which took it across multiple platforms. Following a not-especially kind preview of the game, Dyack (also known for his vision of a one console future) famously argued about the game’s merits with then-EGMers Mark MacDonald, Shane Bettenhausen, and Bryan Intihar on a 1UP podcast.

It’s always a risky proposition to announce a trilogy before ever releasing anything as you run the risk of people disliking the initial release and then being put in a hard spot. A sequel to Too Human hasn’t been clamored for by many but it’ll be interesting to see how Silicon Knights -- which previously worked on Eternal Darkness and Metal Gear Solid: The Twin Snakes -- responds to complaints about the first game. 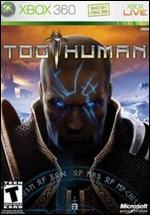