During an earnings conference call, THQ confirmed the sequel to Metro 2033 will be called Metro: Last Light.
The sequel’s existence was confirmed last June. THQ core games VP Danny Bilson said a 3D version of 2033 was being demoed at the time, adding, "We’re going to be doing a 3D version of that on Metro 2034 -- the sequel. And there will be some engineering costs there, but that’s in our lowest cost center in the world. Those games are unbelievably reasonable, they’re built in Kiev."

More recently, domain registrations for both Metro 2033: Last Light and Metro: Last Light were found, with the latter now getting the official go-ahead as the sequel’s title.

The first-person shooter Metro 2033 (pictured above) came out in March 2010 and was based on the novel of the same name. It was written by Dmitry Glukhovsky who also wrote a sequel, Metro 2034. The original game was fairly compelling but the actual shooting action wasn’t all that great. That’s certainly something that could be improved upon in the sequel. Hopefully it’ll also get more of a marketing push than the original, which largely went under the radar 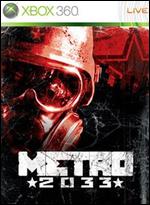