You’re not tired of news about Capcom fighting games yet, are you? If so, uh... sorry. We’ve got some great posts just below this one, some of which aren’t about fighting games. Now, for the rest of you, Capcom announced the release dates for the XBLA/PSN update of Street Fighter 3: Third Strike.

You’ll be able to fight for the future in the online version of a past Street Fighter starting August 23, when it hits PSN. The XBLA release follows the next day. Check out a trailer above to see some of the stuff added to this version of the beloved 1999 fighter -- like GGPO-based online play, graphical filters, and challenges. 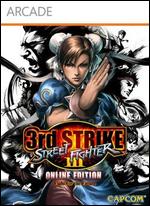