As a fighting game, it was almost a given that Marvel vs. Capcom 3 would eventually get some sort of updated version. Following the release of Fate of Two Worlds this past February, Capcom has announced Ultimate Marvel vs. Capcom 3 will be out later this year on Xbox 360 and PlayStation 3.
Eight new stages, new modes (including Spectator Mode, allowing players to watch online matches as they take place), and rebalanced gameplay are among the updates it brings. New characters are of course the highlight, and Ultimate doesn’t disappoint with 12 new fighters in total. With the existing cast of Iron Man, Wesker, Ryu, Magneto, and so on, that brings the total up to 50 characters.

Capcom has only officially announced four characters, two from each side: Strider and Firebrand (from Ghost ’n Goblins) for Capcom, Ghost Rider and Hawkeye for Marvel. However, by way of GameFAQs (via NeoGAF), the entire roster of characters has been leaked, including two Capcom characters -- Phoenix Wright and Frank West -- who didn’t end up making it into the original version of MvC3.

Capcom had planned to slowly unveil characters in the coming months, much as it did last time around. The leak likely won’t change things -- it didn’t last time -- though it definitely lessens the anticipation for each reveal.

Ultimate Marvel vs. Capcom 3 will be out this November for the discounted price of $39.99. 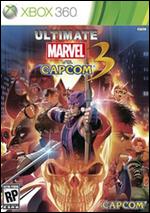