One of the Kinect games Microsoft hoped to capture the attention of children with last year was Kinectimals. It was among several first-party titles that was launched alongside Kinect in November and featured a selection of four-legged animals that included the likes of tigers, lions, leopards, and jaguars. Microsoft is hoping bears are what you’d like to play with most, as it’s re-releasing an enhanced version of the game -- bears being the big addition -- later this year.
If ever there were an appropriate name, it would be this: Kinectimals Now with Bears! is the title that the game will carry. ("Da Bearss" and "Dwight Schrute Edition" must have both been shot down.) Five types of bears -- black, grizzly, cinnamon, glacier, and polar -- will be added as an initial animal option alongside the lion, royal bengal tiger, cheetah, leopard, and panther. Ten additional animals await players, as does a new guide named Bumbilina.

Kinectimals Now with Bears is set for release this fall for $49.99. Thankfully, those who own Kinectimals won’t be forced to buy another full-priced disc to upgrade -- all of this bear content will be available in the Bear Island DLC, which will cost $14.99 upon release. 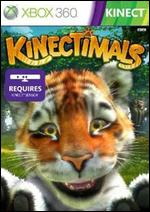