The Japanese and overseas editions of the upcoming Metal Gear Solid HD Collection differ on one important detail: gamers living in Japan won’t get the HD version of Peace Walker that others will, but they do get a code to download the original Metal Gear Solid. As Peace Walker is the more recent game, that makes the overseas version the better deal for most gamers.

Both MG and MG2 were originally released on the MSX2. The first was ported to the NES in North America in 1988, while MG2 didn’t make it here until Subsistence featured it as a bonus.

The exclusion of the first MGS is disappointing particularly for Xbox 360 owners, who have no way of playing it on 360. PS3 gamers are more fortunate in that they can either play the original PS1 game on their system or, if that’s not an option, download it from the PlayStation Store, where it’s been available since June 2009. 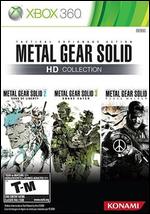 Xbox one no signal
Post by debrartin
0 Replies, 54659 Views